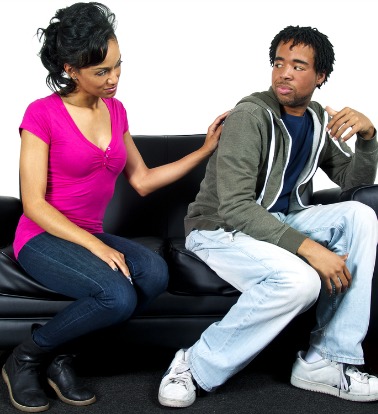 WHEN YOU KNOW YOU ARE DEAD WRONG DO YOU KNOW HOW TO MAKE UP?

I used to be extremely argumentative. Whenever I was in a serious relationship, my boyfriend and I would argue all the time. About what, I’m not sure. Our arguments would go on for hours and include slammed doors, storming off, and cell phones forcefully flipped shut. (As a sidenote: flip phones definitely added a bit of satisfaction when hanging up on someone. I miss that.)

In all that fighting, someone invariably had to be the one to apologize first. I never kept track, but looking back, I realize that it was rarely me. I’d like to say that I wasn’t the one apologizing first because my boyfriend was always the one in the wrong, but that can’t possibly be true. Maybe I wasn’t the quickest to say “I’m sorry” because I’d bought into the fallacy that, as a woman, I’m right one hundred percent of the time.

Unfortunately, whoever started that whole “the woman is always right” thing definitely did women a disservice in terms of fostering positive dating relationships. As a result of this teaching, some women simply never apologize for anything. Men, on the other hand, seem to be the kings of “I’m Sorry” and maybe that’s because they’re taught that they’re always messing up and that it’s their job to maintain the peace in the relationship. Jewelry ad campaigns implore men to say they’re sorry with diamonds. ProFlowers.com has an entire “Apology Flowers” section. Some of my favorite movie scenes involve a man executing a grand gesture to express his desire to reconcile.

Most men [feel they] can never get things done right. We have become so overwhelmed with women’s demands to be treated better, that we’ve somehow lost touch with reality by forgetting to maintain a balance. Some men have become so concerned with pleasing their women that they’ll do just about anything to keep them happy… including apologizing for things they haven’t done wrong.

No healthy relationship consists of one partner always being the one to bridge a divide. If a man is in fact doing a woman wrong all the time, then maybe the relationship should be re-evaluated. In most cases though, there’s enough blame to go around.

Granted, some women do want to apologize and simply don’t know how. If we’re socialized to believe that we’re always right, then what are we supposed to do when we know we’re wrong?

Step One: Figure out a good time. In a little spat, it’s better to just apologize, drop it and move on immediately. In a bigger argument, it may be best to wait until he is in the mood to listen…and you’re in a mood to say “I’m sorry” without using a snappy tone.

Step Three: Own up to your share of the blame. Though men are famous for it, women can be ruled by pride and ego just the same. Admitting your own wrongdoing is not fatal. You’ll survive it and your relationship will probably be better for it. At the same time, there’s no reason to say “you’re right and I’m wrong” when you don’t feel that’s true. Instead offer to agree to disagree or apologize for making him feel a certain way or for saying something a certain way.

Step Four: Be ready for your apology not to be accepted. Depending on the offense, sometimes a simple apology just won’t cut it and your significant other will still be legitimately upset. Consider your apology to be the first step in reconciliation, not the only step. This is, of course, assuming your boyfriend isn’t extremely petty or one to hold a grudge for a week simply because you accidentally erased his show on DVR.

Step Five: Accept the consequences. There are things that an apology just won’t fix. Accept responsibility and do whatever you can (if anything) to fix the situation.

Life is too short to spend time bickering. Being quick to apologize for wrongdoing isn’t a sign of weakness, it’s a sign of maturity. Kids fold their arms and pout when their parents tell them to say they’re sorry. Adults don’t have to be told. They recognize their own wrongdoing, apologize and move on. In the future, choose your battles wisely so neither of you are spending the bulk of your days together apologizing after senseless arguments.

Do you find it hard to apologize to your boyfriend/husband? In your relationship who is usually quicker to apologize (not that you’re keeping track)?