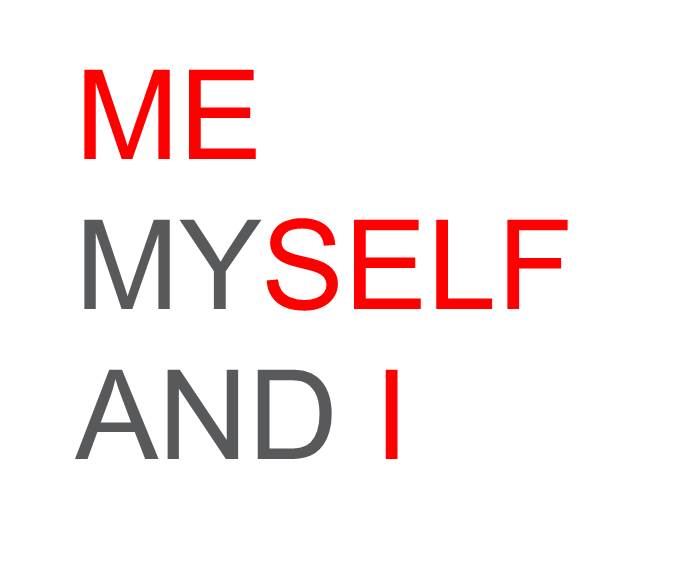 The term Me Myself and I basically says that your first, second, third and foremost concern is you.

If you are single then circumstances might dictate that you have to look out for number one.  You may have graduated Valor Victorian and been pushed to excel to heights where no woman had gone before and  you never “needed” any man to do any thing for you.  OR You may have had a child out of wedlock and had to play the part of Mommy and Daddy for years.  OR in today’s society of “non-man needing” women you were just indoctrinated.

How ever you came to adopt that philosophy as your credo is not really important, what is important is that it is a deadly poison to a marriage.

If you intend to maintain that as a personal motto then you might want to stay single.

Because when you get married you have to trade in the Me Myself and I for We Ourselves and Us. #WTHDHJS

Well this one is not that profound and it would seem like it is a given but you would be surprised at some of the self centered ideas people take into marriage.

We are inherently selfish creatures.  So much so that God even takes time to mention this mandatory trade-in in the Bible.

No I am not saying there is no such thing as marital rape, al la Donald Trump

But while I am not talking about sex here, that passage actually is focusing on sex because God knew that women would use it as a manipulation weapon of mass destruction.

e.g. reward for good behavior or punishment for bad behavior.
but that’s another lesson.

Once you say “I DO” there is no such thing as my money, my bank account, my car, my this or my that.

Now I’m not saying that if you agree to have separate bank accounts from each other that you are going to hell but what I am saying is that you no longer can just assume that it is ok for you to make individual decisions and not take in to account the one you pledged to become one with.