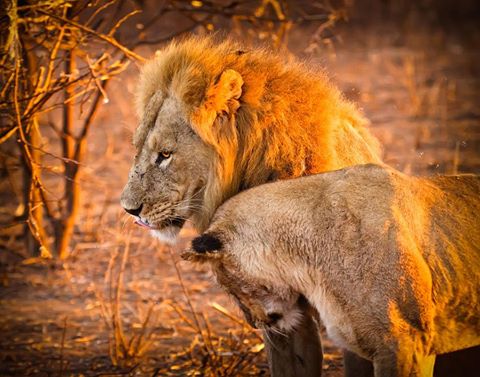 5) For after this manner in the old time the holy women also, who trusted in God, adorned themselves, being in subjection unto their own husbands:
6) Even as Sara obeyed Abraham, calling him lord: whose daughters ye are, as long as ye do well, and are not afraid with any amazement.

In Biblical times the man was King and lord of his house. Today, it might sound a little weird calling your man “lord” but find a term of position, respect, and endearment that you reserve only for him and wear it out.

Big Daddy, Poppy, Your Highness, Your Majesty whatever your’re comfortable with. I can hear some of you sisters now, saying ain’t no way. I’ll even give you a WTHDHJS But remember this is about doing whatever it takes for your relationship to RIP.

And if you learn how to do it without patronizing him you will be surprised at the blessings it will bring. Do you think that loving your man that way is beneath you? I know, your saying, He’s a grown (bleep) man, I shouldn’t have to stroke his ego like that. But it is not about his ego, well maybe it is a little but his ego is not the primary target, his feeling respected more than President Obama, is.

I remember having a conversation with my wife about ONE of the reasons SOME Black men seek to be pastors even though it may not be readily evident that they have been given that particular gift. We determined that it is one of the only places on earth where the Black man can get >>> unconditional respect. <<< I mean think about the pastor of your church. When you are at church, do people call them by their first name? More than likely you call him Pastor or some other official title. Think about how young or old, member or visitor, man or woman go out of their way just to shake his hand. Now think about the women of the church. The food they bring him. The hugs they give him. The gifts they give him. They gifts they are “willing” to give to him. I mean every week hundreds even thousands of people are literally hanging on his every word.

All the while almost everyone he talks to either starts or ends their statement with Sir, Pastor, Bishop, Overseer, Elder, Man of God, Reverend Deacon Dr. etc… Even his close friends will be careful to call him by his title while they are at church. (at least they should) The point is his position commands respect as if he is a King on his throne. Now translate that to your home. Your man is the “King” of your home. Even if he does not always act kingly that is still the position and you should go out of your way to treat him as such. And it can start with something as little as what you call him when he is in his castle.

I hear some of you saying, well he doesn’t treat me like a queen, why should I treat him like a king and the answer is very simple. Because he is the King. I saw this meme on FB and I think it applies perfectly here.

“Men deserve for you to treat them like a king every day. You can’t expect him to treat you like a Queen if you are treating him like a servant.”

So does he love it when you call him big poppa? You bet he does and he will show it in more ways than one.

Just try it and see what happens. When he is in his man cave, put on something tre’ sexe’ and ask for permission to come into his presence.

The next time you are out for a present, buy him a special scepter to keep in his cave.

The next time you are watching T.V. instead of sitting on the other chair or even next to him, sit at his feet and rub them for a while and ask his highness if he needs anything else at the present for his happiness.

Call him “Big Poppa” and #RIP