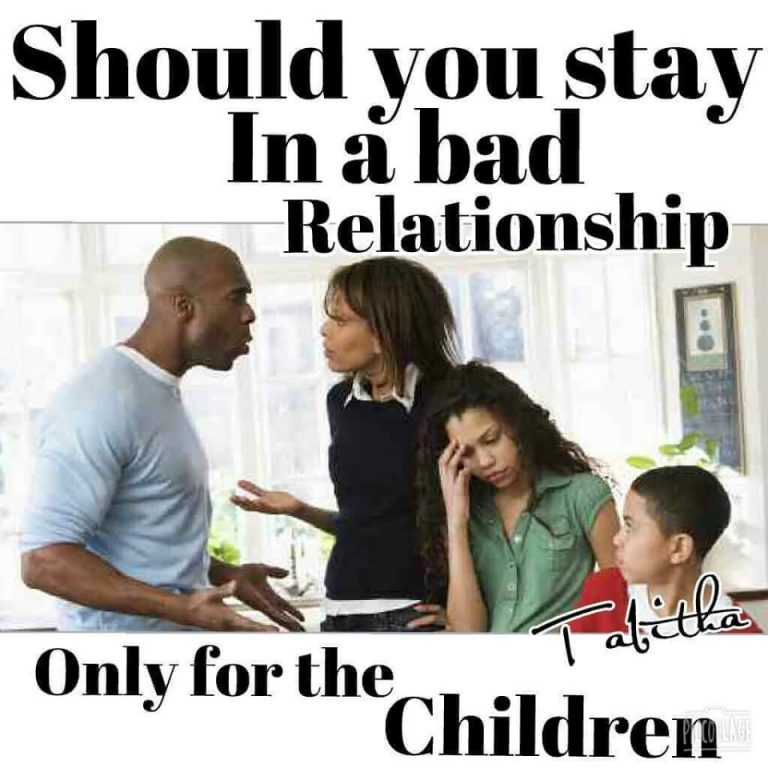 Ok so I have seen this post in few groups and so I will post it in here with my thoughts. WARNING this one is kind of long and it may arouse your feelings but before you respond my death sentence just TRY to go beyond the surface.

I am not saying that ANYTHING is true in EVERY nor am I speaking to YOUR case because I don’t know your specific circumstances HOWEVER – I have witnessed enough different situations to speak on the subject.

We know this is not a new subject and at first I used to think NO but as I have read and listened to the arguments for NO from both men and women, I noticed something very interesting. MOST of the arguments for no have a common thread that involve some level of the love of self or self preservation.

Now if you are not a Christian, this line of thinking may seem a little foreign to you and you may not agree even if you are one. But for the Christian or should I say the one seeking to truly be a Christian with just a touch of spiritual discernment recognizes that the love of self is a deadly cancer in any relationship.

One Christian Counselor puts it this way…

“We cannot afford to let our spirits chafe over any REAL or SUPPOSED wrong done to ourselves. SELF IS THE ENEMY WE MOST NEED TO FEAR. No form of vice has a more baleful effect upon the character than has human passion not under the control of the Holy Spirit. No other victory we can gain will be so precious as the victory gained over self….” Because “under the general heading of “Selfishness” comes every other sin.”

From a relationship standpoint, If it is true that self is truly our greatest enemy then the inability to die to self is WHY we have so many problems in our relationships.

Staying married because of children may not be the BEST reason to stay married but it can be a GOOD one.

Consider the fact that our children did not ask to be born in this world and you were not being mad or hateful or selfish when you were making them. More than likely whether they were planned or not you both took grate pleasure in creating them. You both were giving yourself to one another and the children were the result of that SELFLESSNESS. And in a positive response to that act of selflessness, GOD Himself responded by allowing you to borrow some of His creative power to create another life.

And here is the rub – HE DID THAT KNOWING that you would end up at the divorce lawyers office 10 or 20 years later.

That in and of itself is reason enough.

I mean that is not the first time God has went to such extremes to save someone. The Bible says that Judas was a thief. Not only was he thief but Jesus KNEW he was a thief. Jesus KNOWING that he was thief not only made him a part of his inner circle but made him the TREASURER. WTDTA!!!!!

But after participating in several discussions about this, I see children as another great opportunity to die to self. We already do it daily for our children. We literally sacrifice our lives and our health for our children, giving them everything we possibly can to make sure that they can have a “better” life than we had.

If you are married with children and contemplating divorce, 9 times out of 10 it is because you and your partner lack the ability to die to self. Even with adultery. #WTHDHJS – Yes I said it. Even in cases of adultery. It is not your children’s fault that you and your partner are so selfish. FORGET ABOUT WHO IS MORE SELFISH. Does it REALLY matter? If it does to you then basically you are saying in your eyes you are perfect and don’t need to change ANYTHING about you.

2 Looking unto Jesus the author and finisher of our faith; who for the joy that was set before him endured the cross, despising the shame, and is set down at the right hand of the throne of God.

3 For consider him that endured such contradiction of sinners against himself, lest ye be wearied and faint in your minds.

4 YE HAVE NOT RESISTED UNTO BLOOD STRIVING AGAINST (SELF) SIN.

I’m going to divorce him because he hit me –
They hit Jesus – did he divorce you?

Now before you go there – I am not talking about if your life is danger and your are consistently being physically abused. That would be the 1 out of 10 in my book where the situation needs a change in location and proximity.

But in a time of anger and lack of self control you and your partner have gotten into a scuffle, a shoving match or even come to blows how is that different when you were younger. Have you ever fought your siblings? Have you ever fought your friends? I know I have. But after a few days, sometimes just hours we were back to being friends. Because fighting alone did not change my connection to them. In most cases they were/are still your friends or siblings aren’t they?

Is the person you pledged your life to worth less of that same kind of selflessness. Do children have a greater capacity to forgive than adults?

And like I said they hit Jesus until he was bloody and unrecognizable and he endured all that for you.

Yes I know women are the “weaker” sex when it comes to that and I am in no way advocating physical abuse or that you endure blood and broken limbs – don’t miss the forest because of a tree. The REAL question is could you both have done something different to avoid those situations. And if so wouldn’t be be better to do that rather than to just take the easy route and leave.

I’m going to divorce him because he said something soooo cruel and hateful.
SO! They openly called Jesus a Bastard and ridiculed Him about everything He did. The even called Him the Son of the Devil. Just think today how the news would be if some woman came around taking about being impregnated by a Spirit.

He endured even despised that OPEN shame for you.
Did He cast you aside?

Ok so here is a tricky one (not the 1 out of 10 tho) because this seems to be an unpardonable sin with women (even though there is only 1 unpardonable sin – but that is another post) But the Bible DOES give permission for a divorce in the case of adultery but it is not that cut and dry.

Divorce CAN be an option but it is not the ONLY or even the BEST option.

There are few things in the entire Bible (less than 10) that is listed as being HATED by God and Divorce is one of them.

Is there a better option? Yes! Forgiveness is a better option.
Have you been 100% faithful to Christ?
Has Christ forgiven you for your unfaithfulness.

The Bible does not say that anyone who ever committed adultery will not make it into heaven it says “adulterers” There is a huge difference. In short, that means someone who has made adultery an habitual practice to the point where they are not sorry for doing it. (but that’s another post also)

Am I saying that a man is justified in committing adultery NO, but what I am saying is that adultery is not a bigger sin than lying or murder with your tongue. Nor is it greater than the sin of SELFISHNESS. It is just one form of selfishness.

Adultery once that’s on you. Adultery twice that’s on me. I’m out.
Ok you have the right to be “out” but the Bible does not say you HAVE to be out. As a matter of fact it says a RIGHTEOUS man FALLS 7 TIMES and gets back up.

It has been said by several scholars that Mary Magdalene was woman of the street. If you remember when she came with her alabaster box, there was one in the group that said – If Jesus is who He said He is then he wouldn’t let “this” kind of woman touch Him. Some scholars suggest that in order for Simon to say this so matter of factly, that he must have had inside information on exactly what kind of woman she WAS.

In Luke it actually says that Jesus cast SEVEN devils out of her. Meaning that she just did not pop into being the perfect Christian after her first encounter with HIm. SHE FELL and kept getting up and SHE FELL and kept getting up until SHE FELL at His feet washing them with her tears and her hair. Can you imagine that? I mean lets talk about how they primarily wore sandals and didn’t have paved roads back then. :O And what was His response?

“She has been forgiven much so she LOVED much.”

Marriage is two imperfect people STRIVING to love each other perfectly.

If you married with children and at the point of contemplating divorce then your children are already suffering. In most cases divorce is not going to END the suffering, it is going to compound it.

But I need peace and happiness and that is more important you say.

Actually WHAT YOU WANT AND NEED is not more important you are still working from the standpoint of SELF PRESERVATION.

Now, not only are you are showing that not are you unwilling to die to self for the one you have united in holy matrimony with in front of God and all those witnesses.

Not only are you showing that you did not really mean it when you said for Better or for Worse.

Could things get worse?

You are now saying that you are so unwilling to sacrifice yourself for the one you are supposed to love “Until Death Do You Part” but that you would rather sacrifice them AND the fruit of that love you so happily expressed (the children) to save your ideas, your priorities, your wants, your needs > your self.

What an insult to the self sacrifice that was made for you.