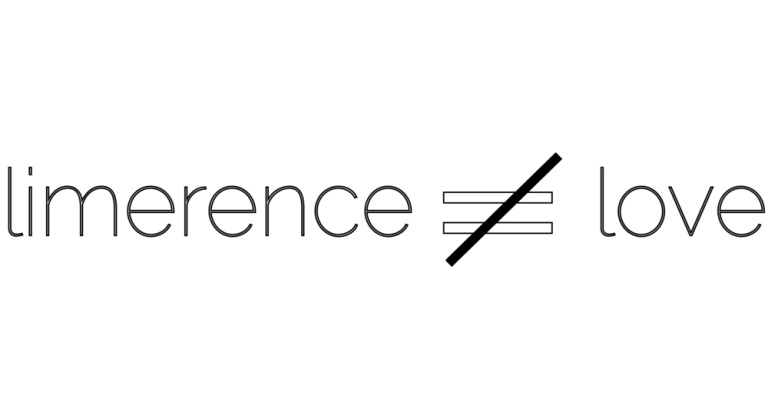 Limerence does not equal Love.

Limerence – yeah I had to look it up too.  But I will save you the trouble.

“Limerence: the state of being infatuated or obsessed with another person, typically experienced involuntarily and characterized by a strong desire for reciprocation of one’s feelings but not primarily for a sexual relationship.”

Another writer defines it as

“an involuntary interpersonal state that involves intrusive, obsessive, and compulsive thoughts, feelings, and behaviors that are contingent on perceived emotional reciprocation from the object of interest”

Heck why not just say “infatuation.”   As I kept reading I found out that infatuation as more of an immature passing kind of connotation.   But limerence is supposedly the more mature version and is actually described is an attempt at a scientific study into the nature of love.

You ready for it?

If say you want somebody to love you for who you are then what you are looking actually looking for is limerence and not love.

Breath deeply and count to 11

Now walk with me.

Notice the characteristics – involuntary, intrusive, obsessive, and compulsive CONTINGENT on perceived emotional reciprocation FROM the object of interest.

K so lets break this down word for word.  I say word for word because words mean different things to different people, so without working definitions of the words or some kind of common understanding of what we are dealing with we can never arrive at any kind of conclusion.

involuntary: done without will or conscious control or done against someone’s will
intrusive: causing disruption or annoyance through being unwelcome or uninvited
obsessive: the domination of one’s thoughts or feelings by a persistent idea, image, desire, etc. (had to use obsession)
compulsive: resulting from or relating to an irresistible urge, especially one that is against one’s conscious wishes.
contingent: depending on something else that might or might not happen.
perceived: to recognize, discern, envision, or understand.
emotional: arousing or characterized by intense feeling or having feelings that are easily excited and openly displayed.
reciprocation: to make a return, as for something given.
object: a material thing that can be seen and touched.
interest: the feeling of a person whose attention, concern, or curiosity is particularly engaged by something: (the object)

No lets apply that to today’s #WTHDHJS

I’ll state again so that it is fresh in you memory.

If say you want somebody to love you for who you are then what you are actually looking for is limerence and not love.

Involuntary:
Do you want somebody to love you without consciously making a choice to love you or against their will?  Think about it. I’ll give you an example.  If you and your man were acting married before you got married and you got pregnant.  He might marry you because it is the right thing to do and not because he truly loves you.  Or you guys may have been together for so long that you became good friends and it just seemed like the thing to do.  Or because everybody else around you kept saying you made a great couple. Or here’s a hard one – because you prayed and God told you too. (we will circle back to that one.,)

Wouldn’t you rather have someone who wanted to love you with out any of those external factors?      i.e by choice?

What if things that happened in your past made you unhappy, uncertain, mean, contentious, unfeeling, angry, hard hearted, uncaring, uncompassionate, unforgiving, unloving, unlovable, unlovely, I could go on but you should get the point.

Do you want someone to love all those unlovely things about you.  No one will voluntarily stay in a relationship with a woman like that.  They may start it, they may stick with it hoping for change or that they can change you.  But eventually all of that poisonous venom will wear down the strongest man’s love because it is love that begets love.  If he pours out his love on you as you are but you are looking to stay the way you are and expect him to take or leave what you give you are not reciprocating you are just consuming.

I know all kinds of red flags about how off base I am are coming into your head but stay with me.

Intrusive:
Do you really want an intrusive man.  One that becomes

But in essence what you are saying is not only does he have to love you for who you are, you are not willing to change for the better to become lovable.  Otherwise you would say something more like I want someone who accepts me for who I am (including your past) but loves me for who I am becoming or going to be (future).

Because you were raised a certain way, on drugs, used to prostitute, was raped, abused or cheated on or whatever terrible things that we men tend to cripple you with why would you want to someone to love you that way?  Those should be things you are not looking to hold on to nor are those things to love.  It is damaging not only them but to you.

I know the first thing that is coming to your mind is but that’s not what a woman means when she says that.

But what have you every thought about what you are actually saying.